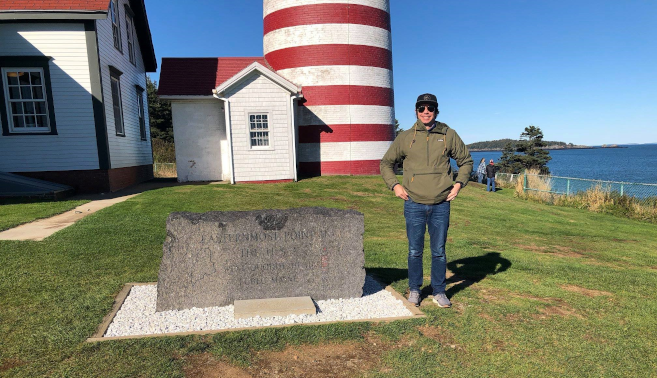 Professor Andrew Green, who is Head of the Marine Geology Research Unit in the School of Agricultural, Earth and Environmental Sciences (SAEES), visited various institutions in the United States during his sojourn.

The venture had its beginnings in 2013 when Green hosted a Fulbright Scholar, which inspired him to investigate applying for the prestigious and competitive FVRSP.

He later hosted an international meeting on sea level changes that included discussion of ideas that could be applied to data his team had collected offshore in South Africa, and identified the potential of the FVRSP to further ideas, which came out of that meeting.

‘The South African and US examples we are using to constrain palaeo-sea levels had strong similarities, and even more importantly, strong differences, which allowed for better interpretations to be made across the global picture of sea level change since the last major ice sheet development,’ said Green.

His FVRSP application was successful, and Green spent time at the University of Maine, the Woods Hole Oceanographic Institution and the United States Geological Survey (USGS) from September to December last year.

Green said highlights of the trip included seeing snowfall in the White Mountains and being snowed in for three days during a storm in New Hampshire.

Another highlight was the opportunity to work with the USGS, during which he was impressed by the access he was given to high-level equipment as well as their representatives’ overall friendliness in answering questions and staging debates.

Green also enjoyed white water rafting down the Penobscot River on an undergraduate field trip with the University of Maine.

‘I established so many lifelong connections while in the US,’ said Green, who felt the connections made on this trip with eminent scientists in his field of marine geology would further his scientific exploration and develop leadership in the sciences.

‘I found that my research level, the skills I have fostered in my students at UKZN, and the outputs we are achieving on a substantially limited budget, are comparable to those of the best institutions in the US. I left feeling elated with the standard of work we are doing here in South Africa and the possibilities for the future of South African marine geology.

‘I am convinced we are achieving on a par with the US, especially given the comparatively miniscule budgets we work within. I am very proud of that, and I am especially proud of how flexible and adaptable South Africans are. I think I am more proudly South African – if that is possible – since my return.’