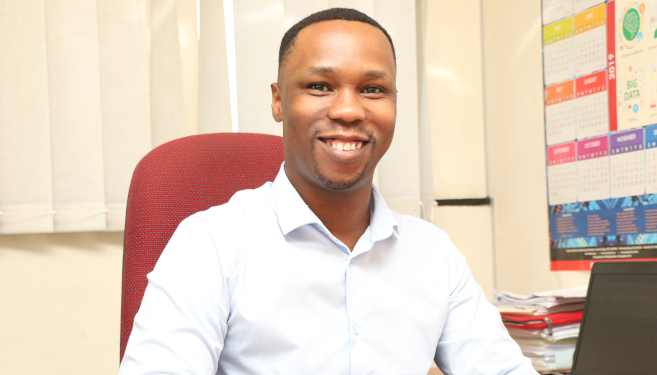 Senior lecturer in the School of Chemistry and Physics (SCP), Dr Mzamo Shozi is among the Mail & Guardian’s 200 Young South Africans (YSA) for 2020 in recognition of his work in catalysis and organometallic chemistry.

The YSA programme recognises South Africans in the fields of arts and entertainment; business, entrepreneurship and tourism; civil society; education; environment; film and media; health; justice; politics and government; science and technology, and sport sectors. This year, the category of COVID-19 heroes was included as an editor’s choice.

Shozi, nominated and selected as one of 23 professionals in the science and technology category, said he was honoured and proud to be included.

‘My presence on this prestigious list sees me as a young leader in South Africa, which is motivating and inspiring in my profession especially,’ said Shozi.

As a chemist investigating the conversion of sugar alcohols derived from plants into chemicals for use in the fuel industry, he hopes to add momentum to the journey towards a greener energy future.

Shozi of Umlazi in Durban initially dreamed of becoming a medical doctor, later declining his acceptance to study Medicine at UKZN to rather concentrate on Chemistry as he began to realise the passion he harboured for the subject. He earned his PhD in 2015 while part of the University’s developmental lecturer programme.

Also the investigator of biomass conversion research in the Catalysis Research Group at UKZN, Shozi was awarded a Fulbright Visiting Research Scholar Program scholarship in 2018 that allowed him to spend time at the University of California.

Shozi, who has worked hard to establish international collaborations to strengthen his experimental catalysis and materials research, also previously received grants from the National Research Foundation, Thuthuka, Knowledge Interchange and Collaboration, and the Royal Society of Chemistry.

The 35-year-old academic hopes to use this recognition from the Mail & Guardian to demonstrate to those around him that there are opportunities for young Black professionals in the fields of Science, Technology, Engineering and Mathematics (STEM) to stand out and lead.

‘I would like to encourage more young South Africans to get into STEM, as these fields have had a major impact on society and their impact is still growing, for example in the Fourth Industrial Revolution,’ said Shozi. ‘Research in STEM fields satisfies many basic human needs and improves living standards, for example finding cures for various diseases as well as cleaner forms of energy.’