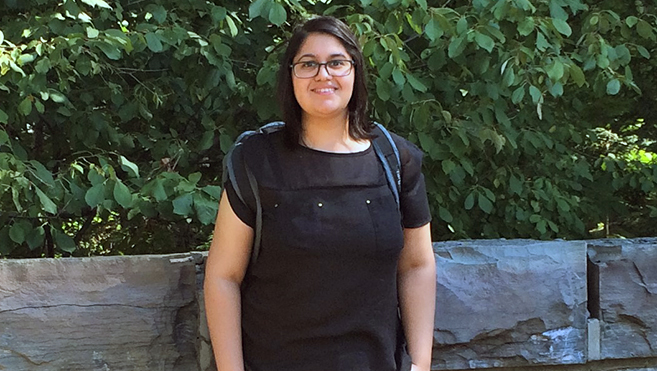 Essack developed an algorithm to detect transiting exoplanets in light curve data from NASA’s Kepler Space Telescope. A transit occurs when a planet passes across the face of its host star and blocks out some of the star’s light. The blocking of star light creates dips in the light curve of the star (a light curve is a plot of brightness vs. time). If these dips occur periodically, it can be indicative of the presence of an exoplanet orbiting the star. The shape of the dips provides information about the size, period and orbital distance of the exoplanet.

Essack’s research was funded by an Innovation Masters Scholarship from the Department of Science and Technology – National Research Foundation (DST-NRF) and the Vincent Maphai Scholarship, awarded to the top-ranked masters student in the entire university.

In addition to receiving the Dean’s Commendation for eight consecutive semesters, Essack was the top student in the College of Agriculture, Engineering and Science throughout her bachelor and honours degrees. She was the recipient of nine scholarships from UKZN, most of which she accepted without purse, allowing them to be reallocated to other deserving students.

Essack is presently pursuing her doctorate at the Massachusetts Institute of Technology (MIT) in the United States, supervised by Professor Sara Seager, a world leader in exoplanet research.

After attaining her PhD, Essack hopes to return to South Africa to start a Centre for Excellence in exoplanets. Centres of Excellence are an initiative of the DST-NRF which focuses on research excellence, capacity development as well as inter-disciplinary and inter-institutional collaboration.

‘Research is a challenging process with a myriad of positive and negative turns that keep you perpetually motivated in search of solutions. It is ultimately a rewarding journey,’ said Essack.

‘I have been fortunate to learn from and work with world-class researchers in the School of Mathematics, Statistics and Computer Science and the School of Chemistry and Physics at UKZN, who have inspired me and helped me to grow as a scientist and a researcher. I am grateful to have received an education that has allowed me to compete at an international level in my field.’

Professor Kavilan Moodley, of UKZN’s Astrophysics and Cosmology Research Unit said: ‘Zahra was involved in original research in developing an independent technique to extract transiting exoplanets from Kepler light curve data. Kepler has revolutionised the field of exoplanet research and Zahra’s successful analysis of this data demonstrates her competence with research methods and their application in this field.’

Dr Matt Hilton (senior lecturer, MSCS) said: ‘Zahra was a brilliant and hardworking student and it was a pleasure working with her. I wish her all the best for her PhD studies in the United States.’