Launch of Centre for Academic Success in Science and Engineering 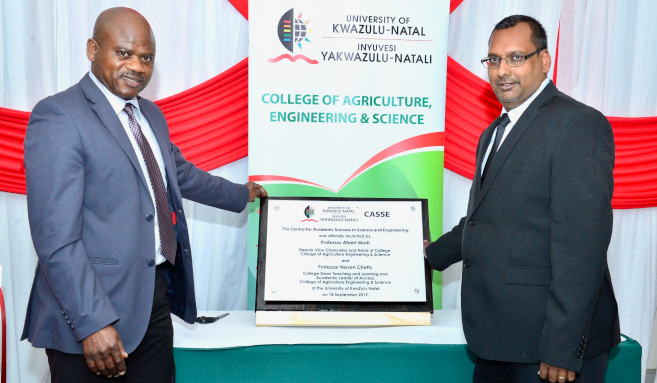 Professor Albert Modi and Professor Naven Chetty at the launch of the Centre for Academic Success in Science and Engineering.

The newly-opened Centre for Academic Success in Science and Engineering (CASSE) at UKZN consolidates a proud tradition of foundational access programmes and holistic educational pedagogy within the University spanning 30 years.

Science and Engineering bridging programmes within the College of Agriculture, Engineering and Science (CAES) have a rich heritage. As far back as 1988, the UNITE Engineering Access Programme started on the former University of Natal’s (UN) Howard College campus, while the Engineering Bridging Programme was launched at the then University of Durban-Westville (UDW) in 1993.

UN started its Augmented Science Programme in 1991, while Science Foundation programmes were offered on UN’s Pietermaritzburg campus from 1991 and at UDW from 1999.

College Dean of Teaching and Learning Professor Naven Chetty described CASSE – in its new guise – as a holistic one stop shop for students which enhanced their chances of success.

‘Today marks a significant milestone in the history of the College,’ said Chetty. ‘The launch of CASSE continues the tradition of successful alternative access and solidifies the commitment of the College in ensuring that there is a viable mechanism to address the inequalities of the past by providing access to tertiary study in Science and Engineering for students from deprived socio-economic backgrounds.

‘The Centre aims to put these students on a playing field level with that enjoyed by students from better socio-economic conditions and who attended schools with good resources.

Keeping with the sporting analogy, DVC and Head of the College, Professor Albert Modi, remarked that the establishment of the Centre was part of the College’s game plan to ensure that all its students passed through the goalposts of academic success and graduated successfully with their degrees. ‘It represents our commitment to high quality science, engineering, technology and mathematical education at UKZN,’ he said.

‘The establishment of CASSE heralds a new era for the College, whereby it provides the best institutional opportunity to actualise and maintain sound academic practice for the betterment of the students and it will ultimately positively influence pass rates and throughput, decrease attrition rates and finally reduce time taken to graduation while being fully vested in transformation and increasing access to quintile 1-3 students.’

Former Director of the College’s Science Access programme, Professor Neil Koorbanally said CASSE was what was needed to take students to the next level. ‘The success of the College’s access programme becomes evident when these students are mainstreamed and often emerge as the best of their cohort,’ said Koorbanally. ‘We have MSc and PhD students who started in Access and are now flying the South African flag high at overseas universities.’

Guest speaker Dr Anele Mkanya is a shining example of the success of the programme. Coming from a disadvantaged background and entering UKZN through its Augmented Programme, he now holds a PhD in Physics. ‘Without this programme, myself and many of my contemporaries would have been deprived of the opportunity to succeed at university and go on to do great things,’ he said.

Under the new model, CAES offers two access programmes – the Engineering Access Programme (EAP) on the Howard College campus, and the Science Access Programme (SAP) on both the Westville and Pietermaritzburg campuses.

The structure for both the Engineering and Science Access programmes involves an extension of the standard Engineering or Science degree by one year. ‘For the first two years of these degrees, the students are part of the relevant Access programme,’ explained Chetty. ‘Once students have completed the two years, they move directly into level two of the Engineering or Science discipline chosen, having completed the level one prerequisites and electives.’

Long-time CASSE staff member Ms Gillian Dawson said: ‘I am so proud of the hundreds of students who have passed through this programme and graduated. They can go as far as they want to.’

Her fellow speakers were quick to point out the crucial and selfless role played by CASSE’s dedicated and committed staff. ‘Our students are successful,’ said former DVC for Teaching and Learning, Professor Bala Pillay, ‘because for all our staff, our students matter.’