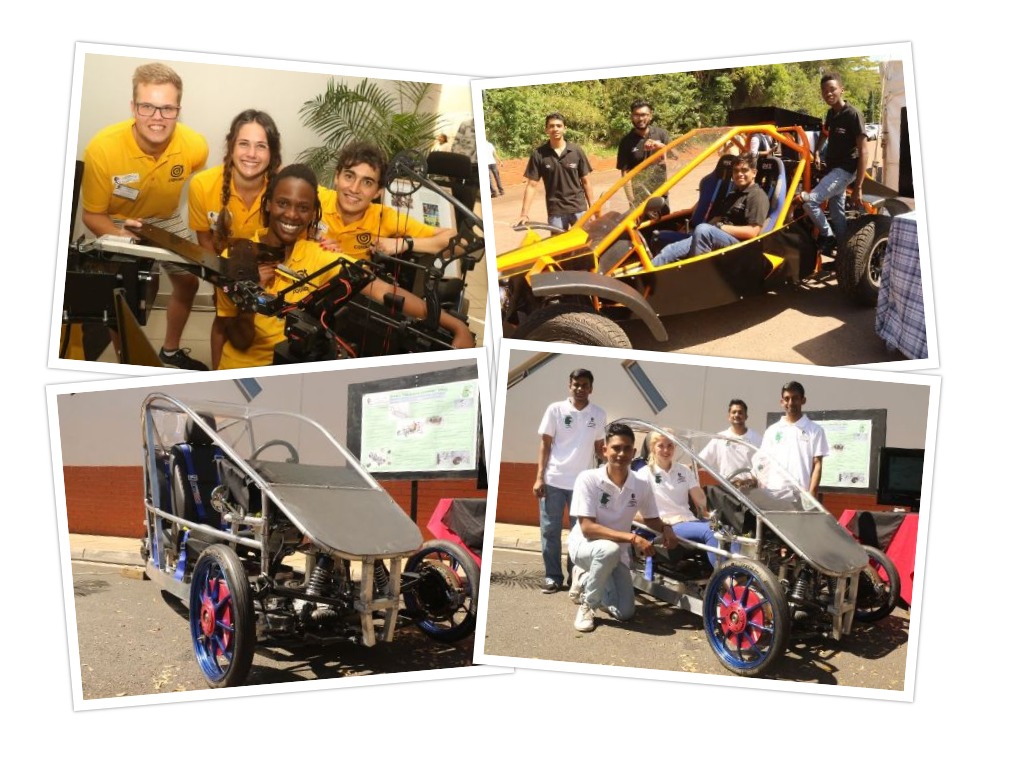 The Discipline of Mechanical Engineering at UKZN recently held its annual Open Day at the UNITE Building on the Howard College campus, and crowds of parents, friends, industry sponsors, evaluators and the public were treated to a display of innovative projects and exhibits that included a drone display and a hovering car.

The 21 projects put together by final-year student groups of four members each provided the students an opportunity to apply skills and theories learnt during their studies, and formed part of the degree requirements for the Design and Research Project modules. Projects were assessed according to the Engineering outcomes required by the Engineering Council of South Africa (ECSA).

Projects included a semi-autonomous 3D printing and distribution system suspended from a tree that recalled a favourite children’s story, a trike electric commuter to meet demand for eco-friendly electric vehicles, a flying hovercraft remote-controlled steering system and an autonomous search and rescue Aqua Quad to enable offshore rescues. Among other things, groups also designed an autonomous mobile security robot to conduct surveillance and monitoring, a solar energy desalination plant that produces five litres of fresh water a day and a quadriplegic unassisted archery device whose designers hoped it would inspire a quadriplegic division within para-archery.

The latter project was dedicated to the memory of Clint Eccles, a quadriplegic who inspired the project but sadly passed away shortly before the Open Day.

The day’s bumper programme included demonstrations of aerospace research and jet engines, the famous technology pedal bus, a 4D-vehicle simulator, a demonstration of the application of robots in business environments and search and rescue operations, and a tribute to Professor JP Bindon.

‘It’s nice to see people enjoying the day and interested in the projects, because while the projects look daunting, they are actually simple to understand,’ said final year student Mr Dhiven Naidoo.

‘We had to be innovative, and do things we wouldn’t ordinarily have done,’ said Mr Nabeel Peer, final-year student. ‘We had to learn to manage budgets and we ended up enjoying the project.’

‘I am always delighted to see UKZN assume its position in this field to prepare innovative curiosity in these leaders and engineers of tomorrow. The students always work on relevant and marketable solutions for industry and society – the biggest (if not the only) clients worldwide for any product,’ said Mr Euclid Nkuna from MAHLE Behr, one of the judges.

Once again, the open day was a refreshing and encouraging experience for me as a judge, and the projects properly showcased the quality of student being produced by the department,’ said Mr Vaughan Rimbault, Chief Executive Officer of the South African Institution of Mechanical Engineering.

‘Despite their lack of industry experience, the students consistently promoted sustainability in their projects, and took pains to emphasise the impact of their projects on greater society. Their obvious concern for the wider impacts of mechanical engineering bodes very well for a profession that can add real value to all our citizens.’

A number of prizes were awarded to groups for their work, with recognition for industrial and commercial potential, best research content and the best engineering displays. Projects awarded were: the parallel kinematic architecture CNC milling and gripping system; the SAFFIRE rocket engine; the quadriplegic unassisted archery device; the autonomous search and rescue Aqua Quad; a mesh welding press; an axial flow turbine to supply agricultural power needs; an urban electric transporter (or trike); a natural fibre composite project for platform development; and a solar dryer for faecal sludge.