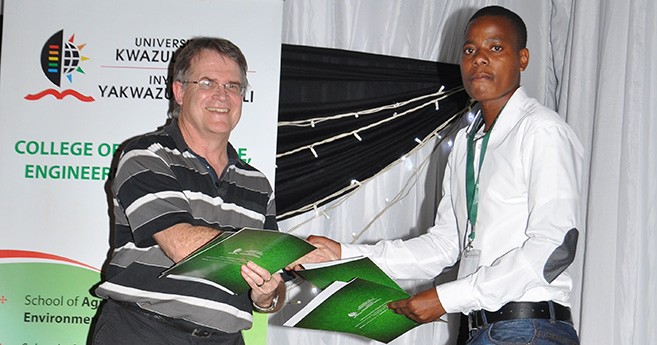 Mr Sfiso Gumede is one of the recipients of the Talent Equity and Excellence Acceleration Scholarship awarded to Black South African students who have achieved academic excellence and aim for a career in academia.

‘I feel very excited about receiving the scholarship and I perceive this opportunity as a significant advancement in my career. This scholarship will help me grow personally and academically. I will also help me fulfil my dream of becoming a researcher, something I have always wanted since I joined UKZN in 2012,’ said Gumede.

The Master’s candidate is conducting his study on the topic of Quantitative Polymerase Chain Reaction (Qpcr) and Near Infrared Spectroscopy (NIRS) in Screening for Resistance to Sugarcane Smut Disease Caused by the Fungus Sporisorium Scitamineum. He is undertaking his research at the South African Sugarcane Research Institute (SASRI).

The project involves utilising NIRS to detect resistance to smut disease in sugarcane genotypes to reduce the high costs of field screening of genotypes, since current screening techniques can only be applied to a few genotypes at later stages in the selection process.

Originally from Jozini, Gumede completed his undergraduate and Honours degrees in Plant Pathology at UKZN’s Pietermaritzburg campus. The highlights of his time at the institution were completing his Honours project and being able to participate in field trips which he said were helpful in adding depth and perspective to his studies. He chose to study at UKZN because of its standing as one of South Africa’s top five universities.

Gumede received a number of accolades during his undergraduate studies, including the Rijkenberg, Incotec and Link Seeds awards for achieving top results in various second and third year Plant Pathology modules.

After completing his Master’s study, Gumede plans to continue with PhD studies at UKZN. He thanked his PhD supervisor, Dr Nokwazi Mbili, for her guidance and support and credited various Plant Pathology staff members, particularly Dr Kwasi Yobo and Dr Augustine Gubba, as well as fellow Plant Pathology students, for their support during his studies.