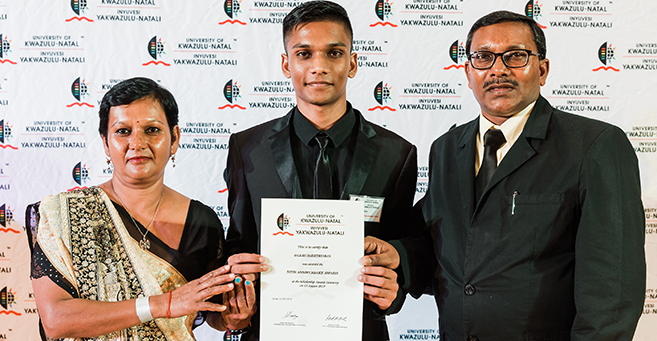 Harrysharan attended Tongaat Secondary School where his activities included serving as the elected Treasurer of the school’s Rotary Interact Club, representing his matric class on the Representative Council of Learners, and serving as a student leader. He was introduced to computers and technology at a young age, developing an early ambition for a career in the field.

Harrysharan chose UKZN for his tertiary studies because of the quality of its education, especially the wide range of opportunities it offers to develop students into successful individuals, and its reputation of producing excellent research.

Harrysharan elected to study Computer Science and IT since he says his biggest strength is problem solving and analytical thinking, both of which thrive on new challenges. He describes himself as motivated, ambitious and a perfectionist who is always up for a new challenge.

‘I believe that Computer Science and IT have given me a chance to develop myself as I am now able to produce creative ideas and solve problems,’ said Harrysharan. ‘I enjoy this degree as it has motivated me to think out of the box and look at scenarios from different perspectives.’

Harrysharan’s family experienced financial challenges throughout his studies but he said he chose to persevere regardless, drawing extra motivation to do well from his setbacks, and dedicating all of his time to his studies. His efforts paid off – he was awarded three Dean’s Commendations and five certificates of merit during his studies.

Harrysharan’s tactics for excelling at his studies included following a carefully set out timetable that allocated time for his studies and for recreational activities, which include volunteering with the local Keep Tongaat Beautiful Association.

His achievements were also recognised when he was admitted as a member of the Golden Key International Honour Society, and also served as a class representative during his studies.

Harrysharan thanked his family for their unwavering support and motivation, saying he would not have reached this point without them.

He aims to enter industry after completing his degree and begin contributing to the improvement of lives through technology.

‘I aspire to build a strong presence in the industry, working for a company that I respect and doing a job I love where I can always learn new skills which will enable me to contribute as much value as possible,’ he said.