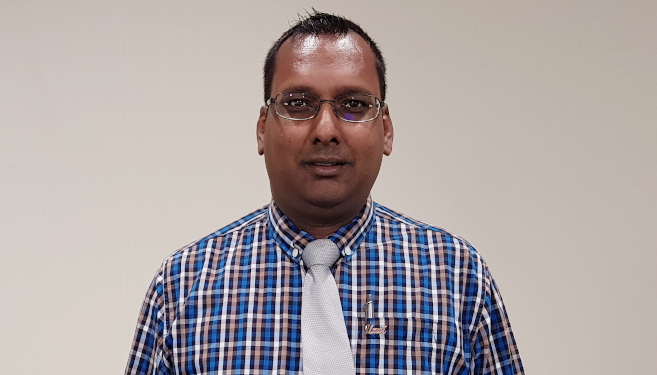 Professor Naven Chetty, has been appointed Dean of Teaching and Learning at the College of Agriculture, Engineering and Science (CAES) after acting in the position since 2017.

‘During his time acting in this role, Professor Chetty has displayed a vision for enhancing teaching and learning in the College, and the University has benefited from his vision while participating in the UKZN structures dealing with strategic issues of teaching and learning,’ said Deputy Vice-Chancellor and Head of the CAES Professor Albert Modi. ‘We look forward to many more years of his leadership.’

While acting in this role, Chetty has focused on initiatives such as blended learning, technological learning and curriculum reform within the College to improve throughput. He has built on the robust CAES student support structure to widen the reach of programmes that emphasise monitoring of students’ academic performance and personal wellbeing, and has focused on closing the skills gap between students in their final-year at high school and their first-year of university. His vision has included continued professional development of teaching staff, and the development of streamlined curricula suited to meeting industry needs.

Chetty has been at UKZN for 14 years, beginning his academic career in the School of Chemistry and Physics through UKZN’s Access Programme. He completed his undergraduate, honours, masters and PhD degrees through UKZN, and was among the first class of graduates in Computational Physics.

Chetty has concentrated his research in the field of Applied Physics with forays into Biomedical Physics, specifically the development of protocols for and use of lasers for cancer treatment. The supervisor of scores of postgraduate students, he is currently supervising 17 candidates.

Passionate about education, Chetty has dedicated much of his career to physics education and developed a large part of the physics curriculum still used in the BSc4 Augmented programme as well as recruitment programmes to encourage top school achievers to join the CAES.

Chetty received UKZN’s 2017 Distinguished Teachers’ Award and has employed the use of educational media and learning material in his student-centered instruction, encouraging students to actively participate in their education. He is empathetic in his approach to his students, focusing on imparting his passion for Physics.

As Dean of Teaching and Learning, Chetty has developed mechanisms for an improved teaching and learning experience for staff and students. In 2019, he launched the Centre for Academic Success in Science and Engineering (CASSE), designed to enable previously disadvantaged students to access support to enhance their performance in Science, Technology, Engineering and Mathematics subjects.

Chetty is a lead researcher and co-ordinator of the South African node of an Erasmus+ project to professionalise undergraduate academic teaching in multiple disciplines to address the Sustainable Development Goals, in partnership with researchers from Frederick University in Cyprus, the University of Crete in Greece, UNISA, the Higher Education Learning and Teaching Association of Southern Africa (HELTASA) and the University of the Western Cape.

Chetty has served on several national and international bodies, including Umalusi and the Council on Higher Education in South Africa, and was last year awarded senior membership of the Optical Society of America in recognition of his experience and professional accomplishment.