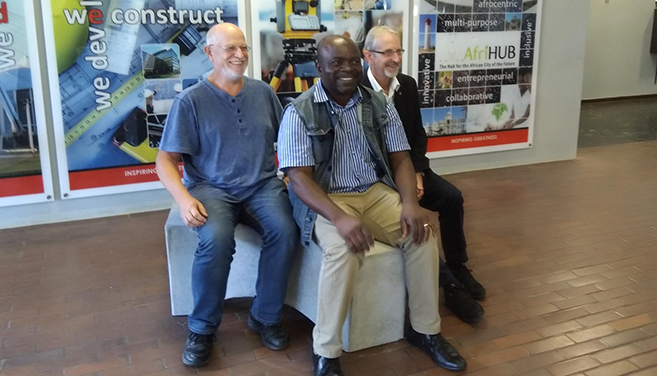 The Concrete Society of South Africa (CSSA) celebrated its Golden Anniversary by donating an elegantly designed concrete bench to UKZN’s Department of Civil Engineering on the Howard College campus.

President of the CSSA, Professor Mark Alexander stressed the vital role the CSSA played in the industry. ‘The CSSA has grown into an influential and respected voluntary association and continues to serve the concrete industry and concrete construction professionals in South Africa with dedication and distinction – consistently and excellently,’ said Alexander.

The focus of the visit by Alexander and the society’s Chief Executive Officer, Mr John Sheath, was not only to celebrate CSSA’s anniversary but more importantly to reach out to universities and emphasise the value of voluntary service. This is particularly relevant to professional societies such as the CSSA where mutual learning and collegiality can be fostered.

Senior lecturer and Head of the Advanced Concrete and Materials Research Group (AdCoM) within the Civil Engineering Department at UKZN, Dr Moses Kiliswa, acknowledged the gift as a commitment by the CSSA to recognise the work done at UKZN as well as a step towards cementing the relationship between the two institutions.

The donation of the bench was apt in the light of the refurbishment recently completed at the University’s Centenary building.