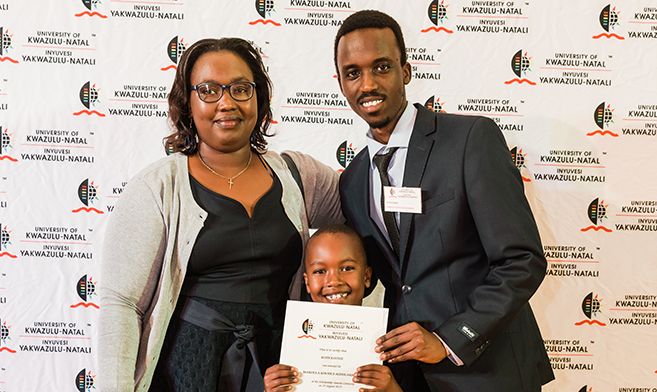 Masters candidate in the School of Chemistry and Physics Mr Kevin Kantize of Burundi has been awarded a Mandela Rhodes Scholarship.

The Scholarships seek to build exceptional leadership in Africa and recognise scholars who demonstrate leadership and integrity; value education and the creation of opportunities for others; are entrepreneurial and innovative; and who promote reconciliation, freedom, peace and prosperity for all.

Kantize said being a recipient of a Mandela Rhodes Scholarship was an honour and a privilege. ‘I hope to inspire the youth to be more involved and take responsibility for the future we want. We can’t afford to escape the responsibility of tomorrow by evading it today.’

Kantize is currently doing research based on electrochemical detection of water pollutants using metallophthalocyanines-based chemically modified electrodes. He plans to use the knowledge gained from his research to help develop advanced analytical techniques that will detect lower concentrations of hazardous chemicals in water bodies as well as water remediation techniques to provide access to potable water.

He aims to develop functional electrochemical sensors that are more sensitive and selective towards specific analytes, and more cost-effective than existing analytical techniques.

Kantize was consistently top of his class, receiving scholarships and awards that enabled him to further his studies.

His contributions are not just in the academic sphere. Kantize is the Secretary General of the Burundian Refugee Community in Pietermaritzburg, where he is involved in the youth development programme and oversees various community projects.

‘I saw that there was a need for someone to get involved and contribute in one way or the other,’ said Kantize. ‘This organisation is important because as the Burundian community in particular, we face challenges and it is always good when people put their minds together to try and help one another.’

Kantize dedicated his scholarship to his uncle Mr Ernest Nkunzimana who died in April this year.