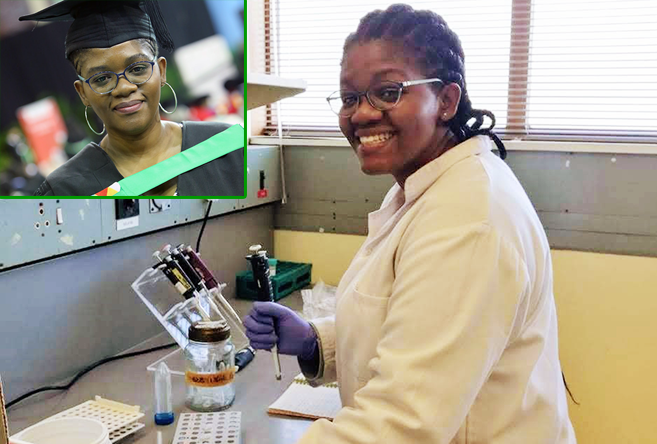 For Ms Sophia Bam, the importance of education has always been the key to her determination to succeed.

Her focus and drive are rooted in her grandparents who worked as farmers in the Eastern Cape and whose legacy ensured that their children and grandchildren were able to receive a good education. Her master’s study investigated the genetics that govern colourful plumage in the Southern African Jackal Buzzard.

Bam, who hails from Pietermaritzburg, chose to pursue her undergraduate (Microbiology and Genetics) and postgraduate (Genetics) studies at UKZN owing to the University’s commitment to transformation and excellence. She said that she wanted to ‘pursue a career in a field in which there were not too many people who looked like me.’

While the numerous challenges she confronted during her studies caused her sometimes to question this choice, Bam persevered. She compares herself to the genes that she studies, as she has developed considerable resilience and adaptability.

Her dissertation focused on the genetic basis of adaptation that results from the gene mutation involved in melanin production and how evolutionary processes have driven colour variation in birds. Its findings are likely to improve efforts to conserve the Jackal Buzzard, which is endemic to southern Africa.

Bam is currently employed as a Department of Science and Technology – National Research Foundation research intern at the University of Cape Town and hopes to pursue a PhD focusing on the genetics of a neurodevelopmental disorder, Autism Spectrum Disorder, specifically in African populations.

‘I want to be at the helm when we bring scientific breakthroughs and development to aid Africa and her people,’ she said.