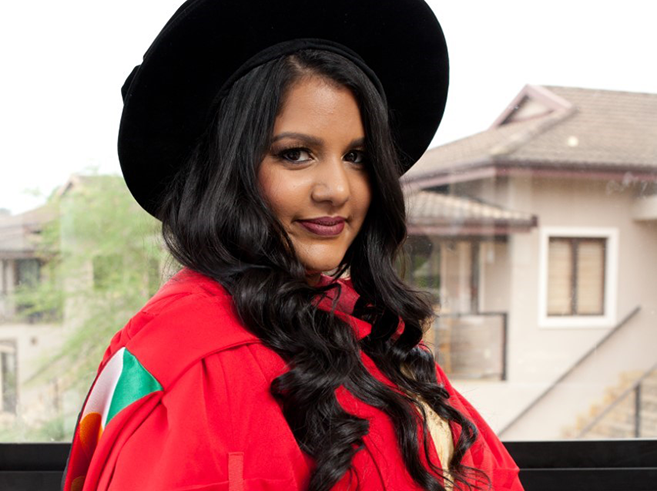 Dr Laurencia Govender was awarded her doctorate at UKZN’s virtual Spring Graduation, bringing the number of full-time PhD staff members in UKZN’s discipline of Dietetics and Human Nutrition up to its full complement of seven.

Govender, who completed her undergraduate degree, postgraduate diploma and Master’s degree in Dietetics at UKZN, investigated the potential of the use of bambara groundnut and provitamin A-biofortified (PVA) maize and sweet potato for improving the nutritional status of rural communities in KwaZulu-Natal.

She has published three manuscripts in high impact journals, one with support from the Sustainable and Healthy Food Systems (SHEFS) project, while also getting support from the uMngeni Resilience Project (URP) for conducting her surveys and acceptability tests.

Govender said the opportunity to work with a range of people on the WRC project and in the SHEFS and URP programmes had been a bonus. She described completing her PhD as challenging but also a good learning experience.

‘If you’re dedicated to doing something and put in the effort, you will get it right,’ she said.

Participating in a WRC project provided support that enabled her to network with other researchers, have her research presented at local and international congresses in South Africa and India, and see her work published not only in academic journals but also in the American Society of Agricultural and Biological Engineers Resource magazine.

Govender said she was fortunate to work in academia while completing her PhD as it provided a lot of room for growth and practical experience which would be useful to her in tutoring students. While dietetics chose her rather than the reverse, she was confident she was on the right path and was passionate about helping and educating people.

With an approach characterised by a belief in the importance of examining the source of problems nutritionally, Govender is an enthusiastic lecturer, and enjoys working collaboratively with other disciplines, saying that nutrition is not a stand-alone issue but requires integrated research efforts.

Dedicating her research to her late grandmother, who she says was a driving force behind much of her work, Govender also credited her supervisors for their attentive mentorship, saying she could not have asked for better support. She thanked Professor Albert Modi and Professor Tafadzwa Mabhaudhi and their “green team” of researchers within the Centre for Transformative Agricultural and Food Systems for their contributions.

Govender made special mention of her fiancé, Mr Ishkar Danilala, for his vital support.