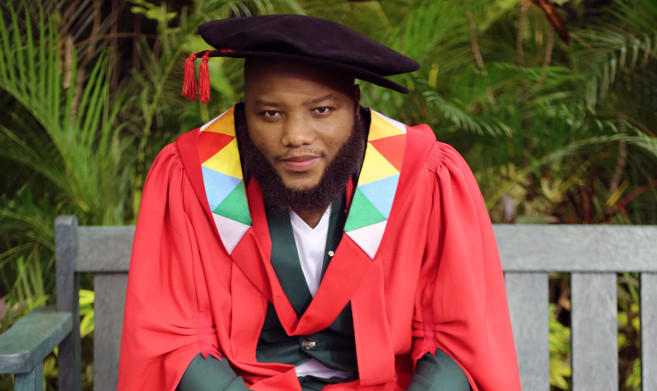 With a PhD under his belt, Dr Simo Mthethwa is looking forward to taking up the challenge of full time academia after being appointed as a Mathematics lecturer in UKZN’s School of Mathematics, Statistics and Computer Science on the Pietermaritzburg campus.

Mthethwa’s dissertation investigated the perfect compactifications of frames – a sub-area of Pointfree topology.

These are certain kinds of compact regular dense extensions of a frame, an example of which is the Stone-Cech compactification, according to Mthethwa’s supervisors Dr Paran Pillay and Professor Dharmanand Baboolal.

Mthethwa explained that the significance of his research lay in the constructive nature of the whole subject. ‘My research is contained in a very large area of mathematics known as “constructive mathematics”, ie mathematics done with less or without choice principles, including the famous “Axiom of choice”,’ he said.

‘Since I come from an algebraic background, it was motivating and exciting to see the theory in algebraic structures like lattices, boolean algebra and rings being actively used in topology which is a completely different field,’ said Mthethwa.

His motivation to pursue research into pure mathematics was spurred by his undergraduate and honours lecturers, Professor James Gordon Raftery and Professor Valentin Gutev, as well as Professor Bernado Rodrigues and his PhD supervisors.  ‘I was inspired by their passion for mathematics and their encouraging words during my postgraduate studies,’ he said.

Mthethwa thanked UKZN for its support throughout his postgraduate studies, as well as the Centre for Academic Success in Science and Engineering (CASSE) for providing him with an opportunity to teach undergraduate Mathematics while pursuing his PhD.  He also paid tribute to his late mother for her moral support during his undergraduate studies.  ‘In his spare time, Mthethwa likes to relax by playing the guitar, ‘mostly blues and jazz’.