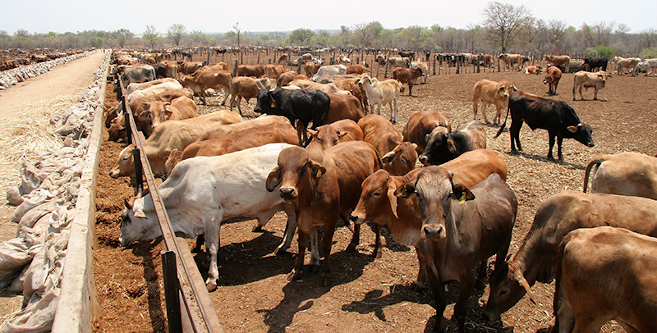 SHEFS is an inter-institutional project funded by the Wellcome Trust’s Our Planet, Our Health Programme that focuses on the intersection of the environment, food systems and health, with researchers in South Africa, India and the United Kingdom investigating food systems currently under significant pressure from demographic changes, shifts in dietary patterns, land use changes and urbanisation, among other pressures.

These global food systems, which researchers point out are not resolving hunger or rising levels of obesity, and waste of up to a third of what is produced, are straining against planetary boundaries, with LDF systems under especial scrutiny.

Authors of the JAFSCD article include UKZN alumnus Mr Kevin Queenan of the Royal Veterinary College (RVC), UKZN researchers on SHEFS Drs Nafiisa Sobratee and Rashieda Davids, and Professors Tafadzwa Mabhaudhi, Michael Chimonyo and Rob Slotow, as well as Professor Bhavani Shankar from the School of Oriental and African Studies, University of London and Dr Barbara Häsler of the RVC.

Using systems thinking and a conceptual systems dynamics model, they illustrate the complexity of the LDF system in South Africa and identify vicious and virtuous cycles, feedback loops, and links to the Sustainable Development Goals.

They explain that providing healthy and nutritious food produced in an environmentally sustainable manner to all people at all times is a complex problem, with often unsuccessful policies that tend towards a narrow focus and quick fix.

The key findings arise from an analysis of a complex system that is undergoing considerable change as a result of an increasing population and demand for food. The legacies of apartheid also mean that large supermarkets and fast-food chains, and large-scale production systems remain dominant, while emerging food producers who lack access to land and skills struggle to enter the formal food chain despite support from government.

Researchers highlight that much of South Africa’s large agricultural land area is better suited to grazing than crop production. They also point to threats to local production, including cheaper imports as part of complex trade deals, frequent droughts, and a changing climate.

In the context of the recent listeriosis outbreak, which posed serious risks to vulnerable population groups such as young children and those affected by HIV/AIDS, the issues of food safety and foodborne disease surveillance also came under the spotlight.

Proving the strength of a transdisciplinary systems approach, this research could aid in the study of similarly dynamic food systems elsewhere and provides a reference for policymakers and stakeholders in South Africa to better understand the complexity and causal links between key elements in the LDF system, and the vicious cycles and feedbacks.

The researchers suggest that sustainable production of safe, healthy and nutritious LDF, with equitable access and just distribution, will require deep structural changes in the South African system. They hope their research will guide policy towards more integrated and durable solutions, highlight possible unintended consequences, and mitigate the risk of system destabilisation that may accompany the necessary deep structural change.