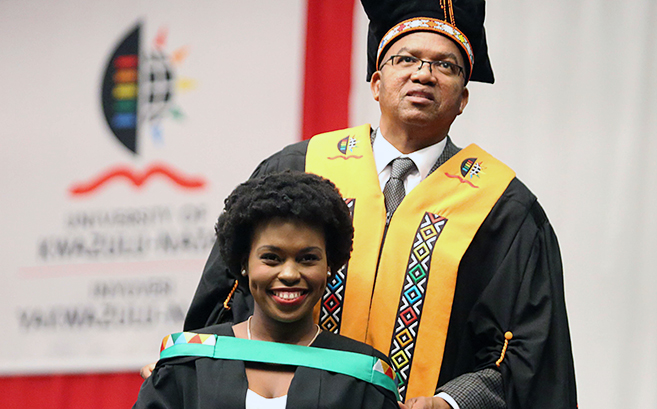 Ms Sthabile Mavundla gets hooded as she graduates with her BSc in Environmental Sciences.

Ms Sthabile Mavundla, who graduated with a Bachelor of Science in Environmental and Life Science at the University of KwaZulu-Natal, is well on her way to a career that will combine her love for science with her entrepreneurial spirit and gift for communicating. This could include a presence on the small screen after she impressed judges on the Presenter Search on 3.

Mavundla, who hails from Margate, on the KwaZulu-Natal south coast, attended Margate Primary School where she was the dux recipient, followed by Port Shepstone High School. Mavundla gave credit to her mother for imparting a sense of responsibility when she encouraged her to be an example to her younger siblings. This motivated her to become the under-16 hockey captain, chairperson of various societies and finally deputy head girl.

‘These and many other roles helped refine and improve my communication skills and deepened my love for people and for public speaking,’ she said.

She thanked her mother for putting her and her siblings first, supporting and believing in them and encouraging them to follow their dreams.

Mavundla, who is one of four children, lost her father when she was only two. During her childhood, she dreamt of being a television presenter, but her mother suggested she looked at additional options. A teacher at her high school inspired in her a love for Geography, which led Mavundla towards a Science degree.

‘Being in university can be really tough, but knowing my mom could drive up to me whenever I needed her was extremely comforting,’ said Mavundla.

As a child, she dreamt of having her own guitar but her family did not have the resources for this. At the age of 15 in her Life Orientation class, Mavundla discovered she met the legal requirements for employment.  She begged her mother to drive her to the local Mugg & Bean where she presented herself to management in her decorated school blazer with her Life Orientation textbook in hand. She was hired for holiday work as a hostess, customers’ first and last point of call, and earned enough for a guitar.

‘The one thing that helped refine and build me into the person I am today is responsibility,’ she said.

In 2016, Mavundla started to grow out her natural hair after researching natural hair care. When friends and strangers complimented her on her locks, Mavundla noticed a lack of natural hair salons and started her own, called ‘Jamelia Afros Deluxe’, at her residence. Using organic products and treatments, Mavundla had happy clients, her own business and learnt to balance school and work.

‘It was a lot of work but my success was fully dependent on the amount of effort and time I put in. The rewards were endless,’ she said.

Mavundla is also keen on deep-sea fishing, and goes go-karting and bowling to relax. Thanks to her penchant for public speaking, she also hopes to join Toastmasters.

Earlier this year, Mavundla entered the Presenter Search on 3, hoping to present on Top Billing as she loves travelling, meeting people, fashion and adventure.

Judges commended her on her energy and style, and were taken aback when they discovered she is a science student. The show will air from 10 May on SABC 3.

Mavundla is interested in pursuing a career in television. She said it was a natural fit for her as a scientist since science requires curiosity, and television presenting often involves interviewing people and investigating matters with genuine interest.

After completing her Honours in Biological Science at UKZN, Mavundla hopes to have time to explore business, ideally by starting her own retail company, while also pursuing a television career.