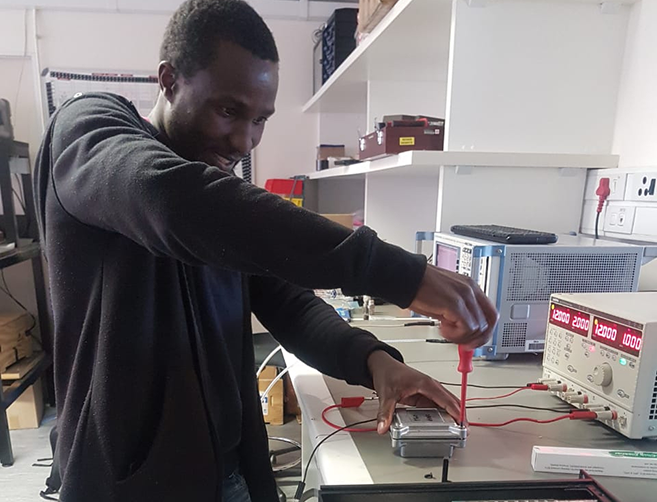 ‘Studying towards my master’s degree was a fun journey blended with hard work, sacrifice and discipline,’ said Mr Austine Acro Gumba, whose interests lie in the cutting-edge world of radio astronomy and astrophysics.

Gumba’s Higher Education journey began at the Durban University of Technology where he studied towards a National Diploma in Electronic Engineering. After completing his BTech, he became interested in radio astronomy and how to bridge the gap between Engineering and Science.

He was aware that UKZN hosted the HIRAX* project, a leading radio telescope investigation under the auspices of Principal Investigator Professor Kavilan Moodley, and Co-Principal Investigators Professor Jonathan Sievers and Professor Cynthia Chiang. Accordingly, he enrolled for an Honours degree in Physics in the National Astrophysics Space Science Programme (NASSP) at UKZN in 2017 trusting it would give him a greater understanding of radio astronomy basics.

‘My interest in radio astronomy started when I was eight years old,’ said Gumba. ‘I would come up with crazy antenna designs in the hope that our black and white TV set would broadcast foreign channels.’

Despite his love for science and the desire to find solutions to real world problems, Gumba’s academic path was not always easy, with the programme being demanding on many levels.  ‘But I invested myself wholeheartedly in my studies,’ he said.

Gumba’s master’s project involved building, testing and putting pieces of electronics together on a radio telescope antenna in order to pick up signals. ‘Once we have the signal, we can analyse and understand it by relating it to the predicted theory in physics,’ he explained.

The Kenyan student described himself as passionate about education and hungry for knowledge. ‘I come from a humble background and  my parents always encouraged me to work hard at school.  This MSc degree means a lot to me and my family.  It has always been part of my dream to achieve this and I am confident it will open avenues for new opportunities.’

Currently, Gumba is pursuing a research assistantship within UKZN’s School of Mathematics, Statistics and Computer Science.  He is building on his master’s research, ‘as there is still much to be done to obtain useful data for our instruments and to perform some calibration analyses.’ He plans to enrol for a PhD next year.

Gumba thanked the South African Radio Astronomy Observatory (SARAO) for funding his masters research, his supervisors Professor Jonathan Sievers and Professor Cynthia Chiang, and Professor Kavilan Moodley, who accepted him for work on the HIRAX project.

Finally, he thanked his friends and family for their prayers and encouragement.

* The Hydrogen Intensity and Real-time Analysis eXperiment (HIRAX) is a radio telescope array that will map nearly all of the southern sky in radio continuum and neutral hydrogen line emission over a frequency range of 400 to 800 MHz.