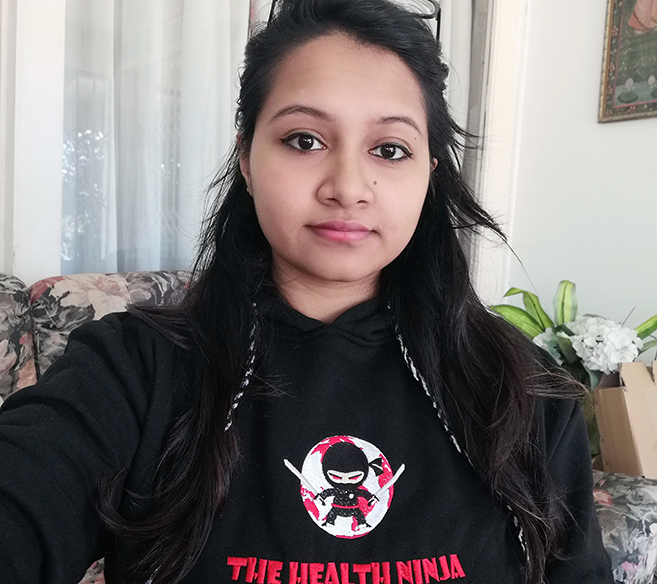 The Westville Girls’ High School old girl matriculated in 2013 with five distinctions and graduated with a BSc degree in Applied Chemistry in 2016.

A lot of her inspiration to study Chemistry stemmed from volunteering as a research assistant with her mother, a pharmacy manager, at the Centralised Drug Resistant Tuberculosis Hospital in KwaZulu-Natal at the King Dinuzulu Hospital Complex.

This early exposure to pharmacy and medicine led Misra to pursue the study of drugs.

In 2017, she completed her BSc Honours degree with a research project in Organic Chemistry alongside Dr Parvesh Singh.

Misra started her Master’s degree in Chemistry under Professor Neil Koorbanally; however, she placed this on hold after being offered a National Research Foundation (NRF) internship as an Analytical Chemist. In February 2019 she returned to UKZN with an NRF bursary to complete her master’s degree.

Misra’s research focused on the synthesis, characterisation and anti-bacterial activity of novel Dihydrochalcone-Triazole-Coumarin hybrids. She found two compounds with interesting antibacterial activity, which may be lead compounds for new and improved drugs.

‘With successful further studies, such as cyctotoxity, these compounds can be developed into new drugs to help combat antimicrobial resistance and improve the lives of patients,’ said Misra.

‘Shriya was a very dedicated and motivated student,’ said Koorbanally.  ‘She has exceptional research skills and is a powerful speaker.  She has worked very hard to produce excellent results, which are well deserved.  I have no doubt she will succeed in her future endeavours.’

Misra was awarded first prize for presenting her master’s research at the annual Postgraduate Research and Innovation Symposium (PRIS) in the College of Agriculture, Engineering and Science.

Misra acknowledged the support from her parents, brother, fiancé, extended family, friends and colleagues throughout her studies.

Besides constantly excelling academically, Misra holds a second dan black belt in karate, and is affiliated with Shotokan Karate International South Africa (SKISA). With both KZN and South African Karate colours under her belt, she was rewarded for her outstanding performance with a full sports scholarship from UKZN in her second and third years, as well as her varsity blues colours. She was a trainer in semi-contact karate at the University from 2014-2017 and in 2015 was named UKZN Sportswoman of the Year.

Misra has her own company, The Health Ninja, which aims to empower young folk to become employable and to help in the fight against communicable and non-communicable diseases. Outreach projects undertaken by the company include a children’s book series titled: To be Healthy; the provision of food and sanitary hampers to child-headed households during lockdown; and ongoing health education programmes at community halls, schools and children’s homes.

‘My belief is that one should give wholeheartedly and without regret, and in return, one will never go short of health, love and light in your life,’ said Misra. ‘Health education is of utmost importance for all people to know and spread.

‘Volunteers are more than welcome to join The Health Ninja, in the fight against all disease, and in the fight for a better tomorrow.’

Misra lives by the words of Abhijit Naskar: ‘Never ask what the world has given you; ask what you can give the world.’